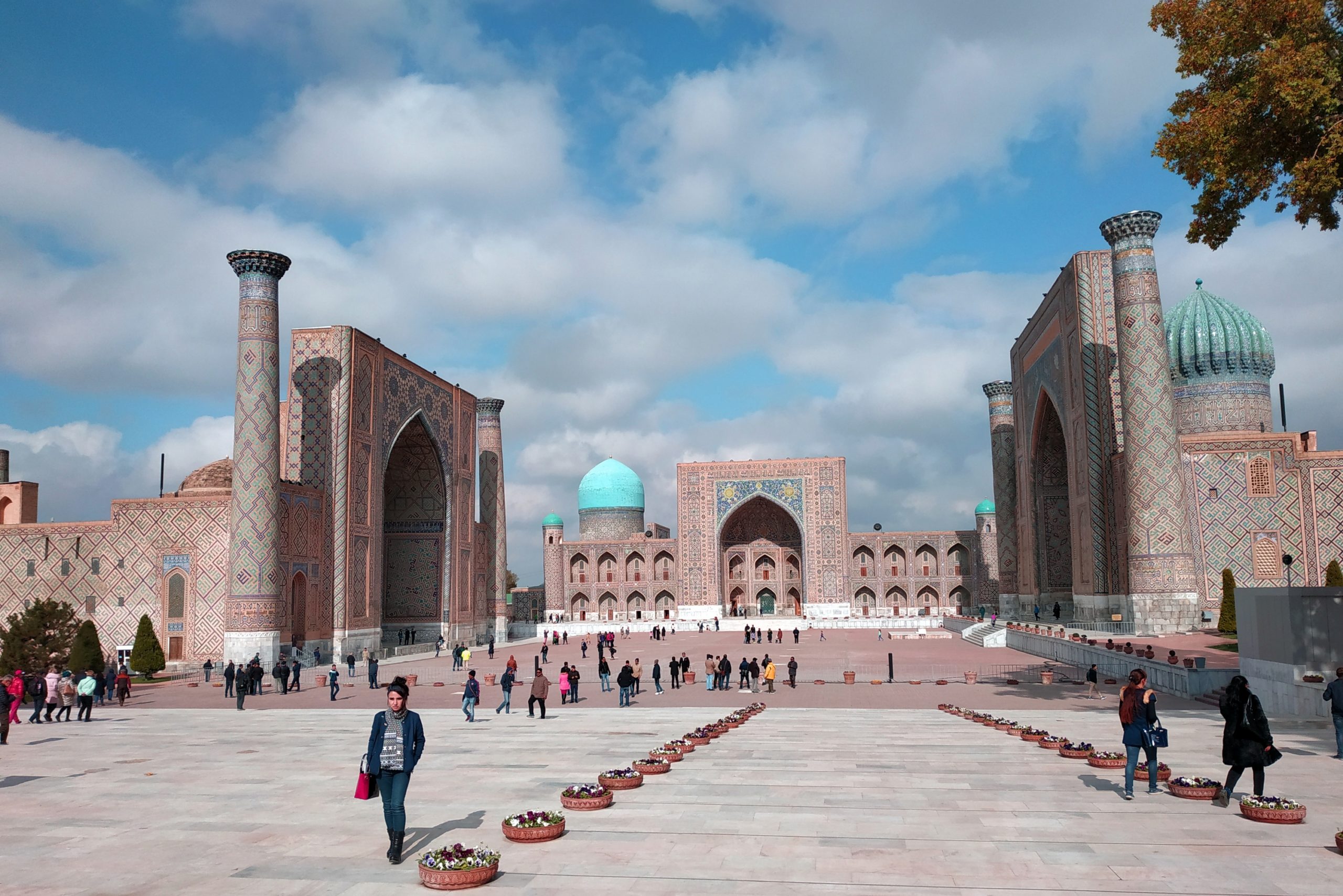 The blooming city of Samarkand, as its name sounds like a melody. But it’s true, you must agree! The history of this city is like a song that flows through the curtain of time, which is more than 2500 years long. This city is unique in its history, a UNESCO world heritage city, was the Golden core on the great Silk Road, where the cultures of the East and West intertwined. It was there that paper production began due to the development of the silk Road, and subsequently the papermaking technique spread throughout the Islamic world. Even in the Holy book of Zoroastrians Avesta there are references to this glorious city. As soon as you hear the proud word Samarkand, a smile of the wisdom of the ages appears before your eyes, like an old traveler who wandered along the river, rapidly moving only forward, like time, crossing the years.

Wise ancient Samarkand has seen in its history the greatest rulers and generals, whose swords intertwined, glittering in the crimson-red colors of brutal battles. Its powerful walls were conquered by the Persian king Cyrus, Alexander the great, Genghis Khan and the Russian king Alexander II. After all, Samarkand attracts with its beauty, which has not left anyone indifferent for thousands of years. Samarkand absorbed all the best from the ancient States that were located on this territory, because it was still the capital of the great Sogdiana, and later Amir Timur glorified Samarkand as the capital of his huge state. It was during the reign of Tamerlane, who patronized the development of science and culture, that Samarkand flourished like a fragrant flower, as evidenced by the grandiose buildings. Moreover, he wanted to make Samarkand the capital of the world and threw all his forces at the aggrandizement of this city. He brought the greatest minds of the time here. You will feel their rich contribution in the unique Oriental style of architectural structures, which show the hand of masters of their craft. Your eyes will sparkle with ecstatic highlights of admiration from the beauty and grandeur of the world-famous Registan square, Ulugbek madrassah, Shahi-Zinda memorial complex, Bibi-Khanum mosque, etc.

If you come to Samarkand, you will hardly need one day to see all the sights. This is understandable, because the splendor of ancient structures will not let you go just like that, hypnotizing you to admire them without noticing the time. Did you know that in Samarkand there is an incredible place where the deepest notes of your soul feel magic? This is the mausoleum of Khoja Daniyar (Saint Daniel), where according to legend his ashes are buried. In this energetically strong place, you will be able to drink from the Holy spring, which came out of the ground when Tamerlane’s horse stopped at this place, when Tamerlane was looking for a place to bury the remains of the Saint. He is revered by both Muslims and Christians and Jews.

But first of all, when you arrive in Samarkand, you will visit Registan square, surrounded by an ensemble of 3 madrassas (educational institutions). You are unlikely to see such an art of construction and decoration. Intricate patterns, complex geometric patterns, rich mosaics decorating the domes will turn your head with their beauty. You will have a unique opportunity to visit the family tomb on the male line of the great Tamerlane – Gur Emir. You will enjoy the amazing work of the masters of that time, who decorated this grandiose mausoleum with marble, jade, onyx, artful woodwork and the finest paintings decorating the building. It is unlikely that there is a city in Central Asia that could boast such an abundance of ancient structures as Samarkand. People from all over the world, who have heard about the historical wealth of this city, come here to touch and catch the haze of ancient history firsthand.

The ideal time to travel to Samarkand would be autumn and spring, although the flow of visitors does not stop all year round. Especially beautiful is the brilliant Samarkand in spring, when the air temperature warms up after the winter cold by the middle of March, and the air is saturated with spring freshness and flowering. Since Samarkand is located in the valley of the Zaravshan river, it abounds in many blooming gardens and fields.

Arriving in Samarkand, you will be enveloped in cordiality and hospitality, taste great and flavorful dishes, see a real Eastern lifestyle, visit the colorful bazaars.