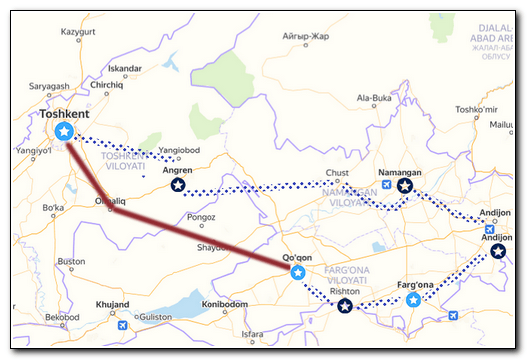 Day 2: Tashkent – Parkent – Angren (150 km)
Breakfast at the hotel. 09:00 transfer to Parket Solar station. The solar complex, located in Parkent city, it was Built in the 80s year of the last century, the complex still impresses with its fantastic “cosmic” appearance, looking like a launch pad or an alien station. Afternoon open air lunch in Sukok region and departure to Angren city (110 km). Arrival and accomodation in Soviet Style recreation zone. Overnight

Day 3: Angren – Namangan (180 km)
After breakfast, excursion to Angren city and beyond. Angren city was created in 1946 from the villages, prior to the collapse of the Soviet Union, Angren had a significant Russian population. The population of the city declined in the 1990s because of poor living conditions, unemployment, and mass emigration. Now it’s like an abandoned city. Afternoon transfer to Namangan city (180 km). Settlement at the hotel and overnight.

Day 4: Namangan – Chust – Aksikent – Andijan (50 km, 80 km)
Breakfast at the hotel. 09:00 transfer to Chust city – one of the oldest cities in the Fergana Valley. In the Middle Ages, Chust became an important fortress. Babur’s father Umar Shaikh Mirza II made Chust his residence in 1480. In the 16th century, the city consisted of several small fortresses. Now Chust notably is known for artisanal products of pocket knives and embroidered cotton skullcaps known as tubeteika. We will visit the Knife Factory, in which metal workers “smash and grind their knives from short lengths of steel or iron, honing each blade into the desired shape with a meticulous attention to detail”. Knives with a curved tip are a trademark of Chust craftsmen. Continue to The ancient fortified residence of the rulers of Fergana region – Aksikent, was built on a hill at the confluence of the Kasansay and Syrdarya rivers. In Babur’s time, Aksikent was the second largest city in the Fergana valley. Time and natural disasters have not spared it, and now, the ruins of Aksikent are hidden under the grandiose clay hills. We will visit archeological site of Aksikent and continue to Andijan city. Arrival Andijan. Settlement at the hotel and overnight.

Day 5: Andijan – Margilan – Fergana (90 km)
Breakfast at the hotel. Today we will visit Andijan city: one of the oldest cities in the Fergana valley (estimated age – 2500 years), a major trading city on the Great Silk Road and an ancient craft center of the region. Andijan is perhaps best known as the birthplace of Zahir-ud-din Muhammad Babur (Babur), who founded the Mughal dynasty that ruled much of today’s India, Pakistan, and South Asia, born in 1483. We will visit Park of Bobur and the memorial house Museum of Babur. Jami complex (late XIX – early XX centuries) – the largest in the Fergana valley and one of the main historical and architectural monuments of Andijan, consisting of a mosque, minaret and madrasah. Continue to Margilan city. In 2007, the country widely celebrated the 2000th anniversary of Margilan – This is another city in the list of famous historical cities of Uzbekistan with a millennia history. Located in the south of the Fergana Valley, Margilan lies in a picturesque place that formerly was right at the crossroads of trade caravans from China to the West and vice versa. On the way we will visit Madrassa of Said Ahmad-Khoja, now this is art and crafts center engaged in the production of silk and carpets. Visit local Bazaar and famous Margilan Silk Factory “Yodgorlik” (not working in Sunday), where you can see the production process of silk fabrics with traditional patterns “ikat”. Evening return to Fergana. Overnight at the hotel